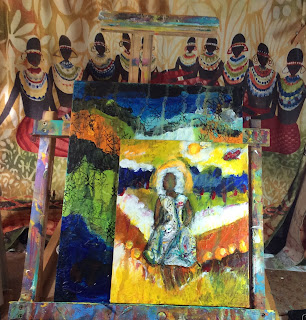 This is day 21,22,23 of 30 day challenge.
A collage and 2 paintings, when I laid one on top of the other I thought it was quite grand. Acrylic skins, acrylic paint and fabric.

Posted by Brenda at 8:07 PM No comments: 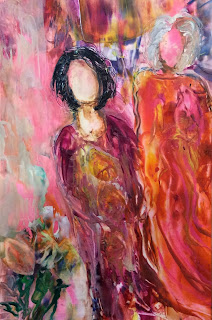 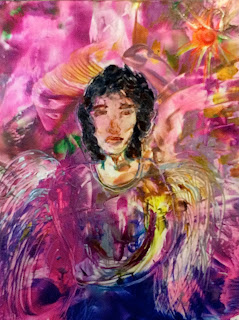 18/30 still attempting to paint figures with encaustic waxes.
I will catch up, I will catch up.
Posted by Brenda at 5:54 AM No comments:

GUARDIAN OF THE LIGHT 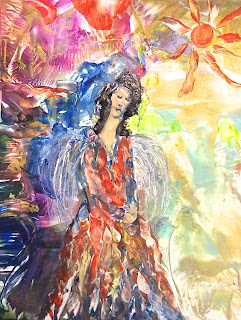 John 1:5--In Him was life and the life was the Light of men.  The Light shines in the darkness, and the darkness did not comprehend it.

"We can easily forgive a child who is afraid of the dark; the real tragedy of life is when men are afraid of the light.
---Plato
Posted by Brenda at 4:52 PM No comments:

IF BIRDS CAN FLY 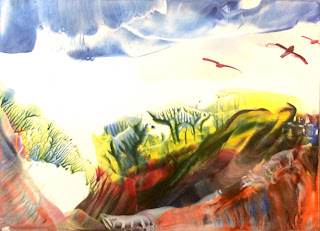 OVER THE RAINBOW, WHY THEN OH WHY CAN'T I??

ARE YOU MY MOTHER? 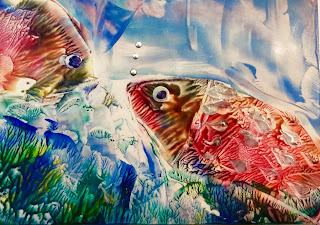 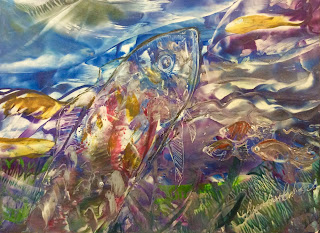 14 day painting. My muse is still staying under the water......it is just too, too hot outside.
Posted by Brenda at 1:50 PM No comments: 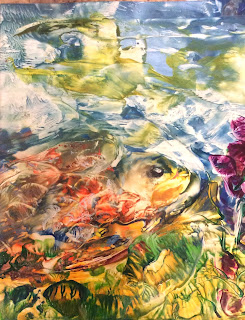 This is  my 13th out of 30 paintings for the month of
June. I will catch up and do my 30.  Someone told me there is also a yellow submarine in this photo, can you see it?
Posted by Brenda at 1:45 PM No comments: 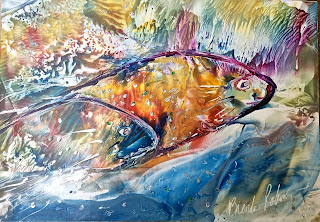 And the Living is Easy. Day12 of my challenge.
Encaustic pigments.
Posted by Brenda at 2:02 PM No comments: 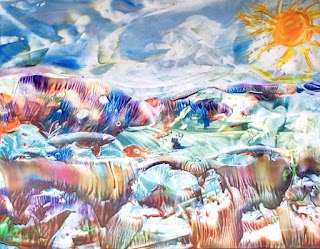 I am sliding into encaustic waxes after my first 10 paintings. I will now do 10 encaustic paintings if things go as I planned.

Posted by Brenda at 1:47 PM No comments: 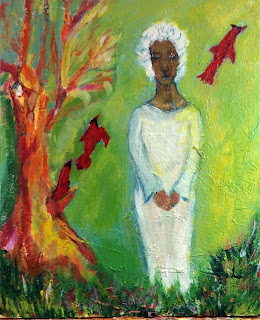 I wanted to name this standing on the promise, but on my morning walk, Burning bush came to me and I said, that's it! The Cardinals were there. Day 10
Posted by Brenda at 4:37 PM 2 comments: 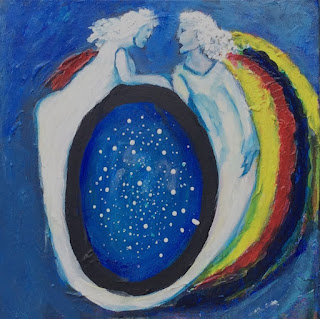 The Cardinal came first, he started as a random glob of paint on the canvas. I outlined him and Voila!
The Red Bird shows up a lot in my paintings. I was born in North Carolina, The Cardinal is the state bird, he was always around and the grown-ups said that the birds worked for Santa Claus and was watching to see if we were naughty or nice. They were everywhere.
As I continued with this painting, I could not decide what to name it, the woman with the rainbow on her shoulder or Secrets etc.  So, I decided to google the significance of the Red Cardinal.
I officially blew my own mind. My hand has stopped shaking now.

The Cherokee Indians (they were abundant in NC at one time) believe that the cardinal is the daughter of the un. Legend has it that if you see a cardinal flying upward, toward the sun, you will have good luck.. he wants you to examine the areas of your life in which you are, or should be, a leader. Is your confidence shaky? The cardinal tells you that you can handle it and to believe in yourself.The cardinal's bright red feathers and cheerful song calls attention to him wherever he goes. If you see a cardinal, it may be telling you to stand up, lift your head high, and take pride in yourself.

Accept compliments that come your way..The cardinal's bright red plumage also calls you to open yourself up and get your creativity flowing again...Red is the color of the root chakra, the energy center associated with stability, survival and security.

I guess the Cardinal is still watching me. There is a next outside my studio window. The name of the painting is Daughter of the Sun.

WHAT SHE SAW IN THE MIRROR 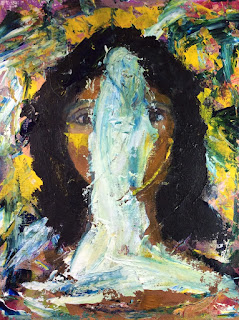 MY DAY 8 PAINTING.  Moving along in my
30 day challenge. This was a painting I had done and decided
to paint over it, had to stop because I saw the image and decided it had to be there.
Posted by Brenda at 2:45 PM No comments:

She Couldn't See the Forest for the Trees 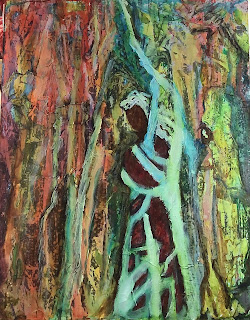 Day 7: This one started out as an expressive, intuitive touch drawing  art painting with tissue paper on masonite board. I had to decipher the story and pull it out. I'll find the original with the tissue paper and post, so you can see the progress.

Really had been stuck behind the couch for over a year waiting to tell the story. 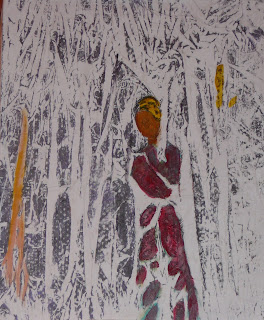 This is how it looked when I first started painting.
Posted by Brenda at 2:51 PM No comments:

Thank all of you out there in blog land. This has been quite a journey. I don't know who
you are.....but you know me and my art.

Happy Monday to you all! 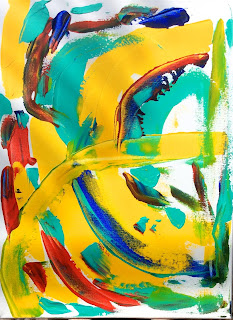 Posted by Brenda at 6:15 AM No comments:

Loving Her Dress of Muticolored Skins 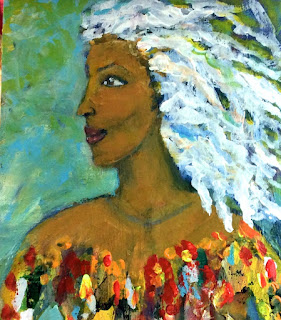 Kethoneth, a hebrew word for dress or garment of various colored skins or garments of light.

After putting them up on my blog, I realize that the
dress does look like people. This is her dress of many colors.....

Posted by Brenda at 2:17 PM No comments:

Life for her ain't been no crystal stair... 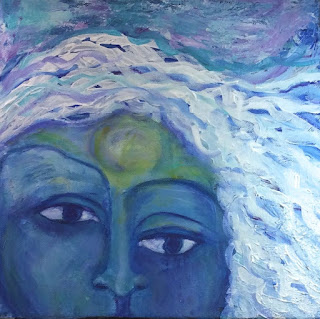 The quote is from a poem by Langston Hughes.
Day 5 of my 30 day paint challenge. I was trying to paint a landscape.....I did the colors and then I waited, and when it dried I saw the 2 eyes and I had to go with the spirit of the paint.

Posted by Brenda at 3:36 PM No comments:

THE TREE OF MANY COLORS BECKONED HER 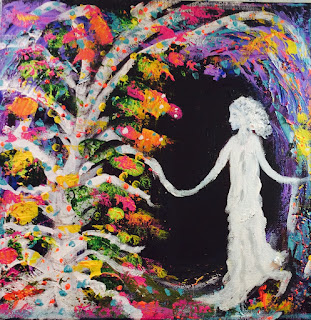 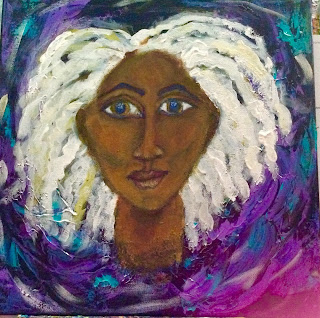 She told me her name is June which means, "she knows" People with this name are dynamic, visionary & versatile, able to make relationships easily.  They may be changeable, restless, untidy and rebellious.....Hummm, I just noticed in my painting number 1 I said that I was falling into the abyss of "not knowing" and June knows......................
Posted by Brenda at 4:27 PM No comments:

COLORS ARE SWIRLING AROUND ME 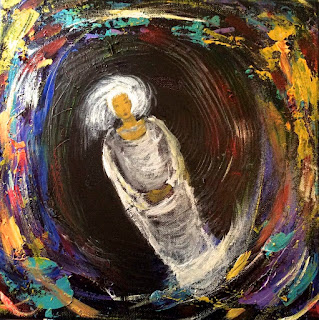 Day 2. Colors swirling around. Acrylic on 12 x 12 black canvas. Loving this.
Posted by Brenda at 4:23 PM No comments: 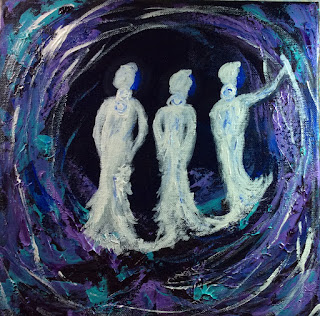 I belong to a group that has challenged us to paint 30 paintings in 30 days. What does it mean to start at the beginning. What changes in this place, am I excited about something new? Beginning to go into the abyss of not knowing. Feeling shaky, strong, introspective and alive. I WILL rise.
Number 1. I am posting to keep myself accountable.

Posted by Brenda at 4:21 PM No comments:

Angel From the Realm of Glory! 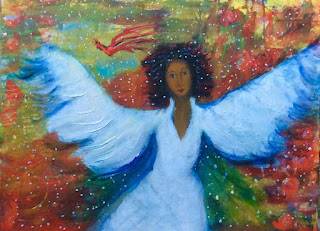 Brenda
A mixed-media artist, who loves altering books, waxing on canvas and cards, tearing up paper, putting things together, spreading paint on canvas.

2009-2010 All Rights Reserved
©Brenda K. Robinson. All text & Images are the property of
Brenda K Robinson. Please Do not reproduce or copy without prior permission. The Copyright Police will find you and
make your life miserable.